A Member of The Greatest Generation Helps Me Review a Gadget 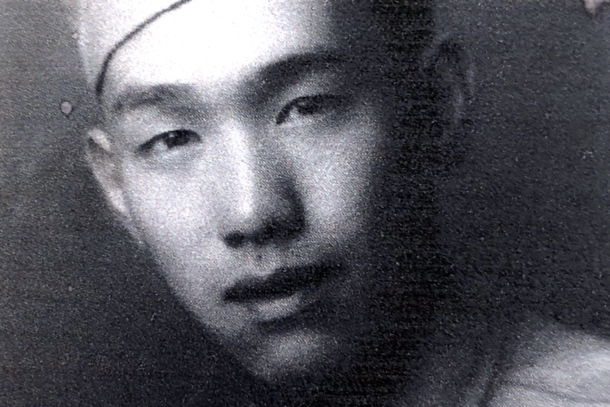 The past month has brought back a lot of references to the “Greatest Generation”. Not only did George H.W. Bush, former President and the youngest naval fighter pilot to serve pass away at age 94, but last Friday, December 7 marked the anniversary of the “date which will live in infamy”. It was the event in our history, the bombing of Pearl Harbor, which sent many from the “Greatest Generation” to serve and defend our county on two fronts. One of these was my late grandfather, who served in the Army and was wounded in Okinawa.

Five years ago, Grandpa helped me review an assistive hearing device I had received to write about for Medgadget. I don’t think the company is in business anymore, but this is one of the pieces I am most proud to have written. In honor of Grandpa, President Bush, and all those of the “Greatest Generation”, it gives me pleasure to re-post a slightly edited version of this product review.

Recently, I received a new hearing system in the mail. I was especially excited to test out this particular device for a couple reasons. First, I was born with a condition called a microtia in which my outer left ear was underdeveloped, leaving me with practically no hearing. My inner ear was fully formed, but is covered by my skull, so a type of technology called bone-conduction devices appealed greatly to me.

Also, when I had interviewed the CEO previously, he expressed that he had a special place in his heart for our brave men and women in uniform who lost their hearing due to loud explosions and gunfire on the battlefront. My grandfather, Adrian, served as a Staff Sergeant in World War II and received a purple heart and other honors during his service in Hawaii and the Pacific Theater. Unfortunately, I grew up seeing Grandpa’s hearing diminish to the point where even the best hearing aids help him little today.

I received both the stereo headband and a baseball cap with the components built-in. Both systems consist of the same basic parts: a small pack consisting of a rechargeable battery, on/off switch, volume knob, USB charging port, and sound processor, two transducers, and two small microphones. The systems felt somewhat delicate to handle, and the quality isn’t up to par with something you’d find at an Apple store. But keep in mind that this is currently marketed on Indiegogo as an experimental, hacker-friendly device, so aesthetics aren’t of foremost importance at this stage. The baseball cap implementation is the most portable solution because there are no loose wires. However, I didn’t enjoy wearing it nearly as much as the headband. The earbud-sized bone-conduction transducers are attached directly to the sweatband part of the cap with Velcro, making the cap awkward and uncomfortable to put on. Since snug contact between the transducers and your head is important for optimal conduction, the cap needs to be fairly tight on your head. Men and women with long hair around their ears may have trouble with this. I found it difficult to find a balance of comfort and optimal conduction, and making these adjustments with the velcro closure was tedious. There’s also the issue of adjusting the volume to an acceptable level. I found that at the highest setting, there would be feedback even with the cap off my head. Once on my head, adjusting the volume turned out to be nearly impossible because of the small amount of space between the volume knob under the bill and my forehead.

After taking the cap on and off numerous times for size, comfort, and volume adjustments, I was finally satisfied with everything. It was amazing how powerful the microphones on the device were. I could hear the shuffling of papers and light tapping noises coming from a table all the way across the room. I could actually discern sounds coming from my “bad” side. However, the cap won’t win any awards for sound quality. The microphones, while sensitive, consequently picked up a lot of background noise. The conducted sound also sounded like you are listening through a wall, which is partially true, but could still be much improved.

The headband system is somewhat of a deconstructed version of the baseball cap in that all the components are separate. The battery and processor pack sit in a pouch that can clip onto you belt. The microphones are connected by thin wires and were crudely taped on the sides of the pouch, which I assume is because they’re likely to be relocated elsewhere. The transducers in the headband are “super transducers” which can output volumes of up to 102 dB, compared to 80 dB in the baseball cap.

The headband is what I asked Grandpa to test for me. Upon placing it on his head and powering it up, I immediately saw a smile appear on his face, followed by a quiet chuckle. My cousin, who was standing behind my grandfather, laughed, and my grandfather turned around in response. I asked him if he could hear me, and he responded yes. To my surprise, Grandpa told me he could hear better with the headband than his hearing aids, but the sound he heard was not nearly as clear. Adjusting the volume seemed to help a bit, but it appears the sound processor still could use some more work to improve clarity. He seemed to also get annoyed whenever I moved the pack part of the system, as the sensitive microphones picked up even a light touch.

I’ve been told that Grandpa likely has some auditory nerve damage, so I’m not sure if he’ll ever be able to hear clearly, but the smile I saw on his face after turning on the device shows that the company, and bone-conduction hearing technology, may be on the right path. The company has a long way to go in improving sound quality and refining the design of their products, but with more research and feedback from the Indiegogo community, they could soon be a worthy competitor in hearing restoration and a life-changer for our courageous veterans.